This morning, I passed the 50,000 word mark on the novel manuscript. That’s not quite 150 pages; there’s not a terrible lot of dialogue, no traditional chapter breaks to push me onto a next page here and there. 50,000 words sounds like a lot. I suppose it is a lot. My freshmen composition students will have to write 5,000 over the course of the semester, and most of them consider that a lot of words at that point in their academic careers. No one talked about wordcounts when I was in college, but I know there was a time when twenty pages felt like a lot. I remember, too, when twenty pages felt like not enough: one of those times was on Tuesday, when I gave a brief talk on J.R.R. Tolkien’s translation of and commentary on Beowulf. I had forty minutes (about twenty pages of material) in which to present, and then twenty minutes for Q&A. It was a marvelous experience—a top-notch audience of mostly senior citizens who brought thoughtful and interesting questions. But the whole time I was utterly gasping for another hour. Only forty minutes, but so much to say.

If I had written all 50,000 words in one month, I could consider myself something like a NaNoWriMo winner, save that it’s not November. I didn’t write them all in one month. It’s really been about a month and a half, since my AAS return, with some dead-in-the-water days here and there.

But 50,000 words. Some publishers call that the official starting length of a novel. Too long for a novella, so it, like Oliver Queen, must become something else.

But, of course, I know I had a novel in the works, and here, on this auspicious, round-number day, what I hit was a feeling that I had told roughly one-third of the story. So, all today tells me is that it’s only time to keep going.

And maybe I’m really only thinking about this round number because yesterday was another one: my ten-year wedding anniversary. Because my sneaky gray hairs are the only thing keeping people from mistaking me for a teenager (because people can’t see the way staying up past eleven p.m. wrecks me now, because I try to keep my septuagenarian crankiness at having my habits mussed out of public view, because many things), this anniversary has met some disbelief from those we’ve newly met. That’s fun, in its way, but that number, too, feels arbitrary. The day after ten full years of cohabiting and wearing rings and being generally constantly underfoot with someone is neither easier nor harder than the day before, or 87 days ago, or 71 months ago. And maybe that’s just me, looking too hard at milestones that make greeting cards an easy sell. It’s too simple to transition these kinds of moments into a mark of endurance, though, like the pin or pen or ugly watch you get for five or ten or twenty years at a factory job. Congratulations. You’ve lasted this long. Maybe it’s because marriage is often sold that way, too: well done for surviving each other.

This morning, and yesterday morning, I turned off the visible word count in my document. It was getting too easy to simply stop at some other round number of words, to feel like I’d put in my time for the day, rather than pursuing the energy of the scene, or pushing through some difficult thing. And I got to an important point, something that turned the novel’s great wheel, and I was glad.

Then I cheated. I looked at the number. I totally Tweeted about it, was (and am) grateful for the little stars of support. I wrote it down. Fifty, for how many thousand. Ten goes into that so many times. I chewed on it, thought of this post, and I’m thinking of it still. I dinked around with it in my journal in two colors of fountain pen ink. 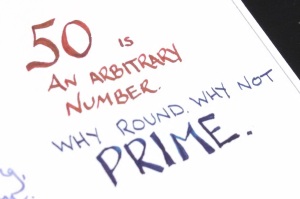 Let’s not count days, words, years. Let’s see where the story goes, however long it takes.